With Hispanic Heritage Month in full swing, AMA Chicago wants to explore the latest trends in Hispanic marketing and how it impacts the broader community.

That’s why we spoke with Ozzie Godinez, CEO of PACO Collective, one of the coolest and most influential Hispanic agencies in the country.

Of course, they don’t call themselves an “Hispanic agency.” Their logo says “Cross-Cultural Marketing,” and their website touts the advantages of diversity and inclusivity. With Latino culture becoming more and more mainstream, Godinez shared his views on what makes “Hispanic marketing”—or any kind of marketing—powerful today.

What does it mean to be a Hispanic marketer, anyway?

“That’s an awesome, loaded question,” laughs Godinez. “We’re living in interesting times. We started as an Hispanic marketing agency 13 years ago to connect with Latinos in the U.S., but the market has evolved.

“Now we’ve seen the proliferation of Latino culture in the modern mainstream, which I find inspiring despite the political rhetoric. We use our platforms as an opportunity to open eyes and portray Latinos as they really are.”

He points to three factors that have combined to blur the lines between Hispanic and mainstream American culture:

He adds, “As a marketer, I dig into the why and how. Latinos have always been part of the fabric of America, and that story gets lost. It’s awesome we have the platform of Hispanic Heritage Month, but what about the other 11 months? We have a huge influence into what America looks like and listens to.”

A kitchen for strategic planning

“The U.S. will be a minority/majority country by 2045, and some counties already are,” says Godinez. “That will have a significant impact on food & hospitality, and we want to be at the epicenter of that. Recipe development can be a part of strategic planning for our clients in the culinary field.

“We have several clients in CPG and QSR, and our data mining platform lets us share insights with brands on trends. What’s the next hot ethnic menu item? The next potato chip flavor? What spices are going to be popular? It’s really exciting and profoundly enlightening.

Changes in language and media

Godinez points out two more major changes in the landscape since PACO Collective was founded—in language and media.

“Language isn’t always the way in,” he says. “Data shows that Latinos are more often bilingual, or even primary English-speaking. And the lexicon used by many Latinos includes words that don’t exist in any Spanish dictionary.”

One example: the Spanish word for “truck” is “camioneta,” but he hears many Latinos say “troca”—and savvy marketers use it, too.

“Brands need to connect in a culturally relevant way,” he says. “The message has to be authentic and meaningful, not based on stereotypes. When someone thinks, ‘This brand understands the way I talk,’ it breaks down barriers.”

Another way beside language to reach a Latino audience is through their preferred media. “Latinos over-index for almost all social media platforms, especially Facebook. We over-index for smartphones. You have to understand that media consumption and behavior.”

Asked about today’s political climate, Godinez says, “That’s a very emotional issue to me and our team.

“I’m an immigrant. My parents came here with the idea of building the American Dream, and I’m a product of the American Dream—I wouldn’t have had the right opportunities in Mexico. I’m really proud and thankful about that. And when you look at Latino values—family, faith, a hard work ethic, education—those are the pillars of America.

“So, when we look at where we’re at in the public discourse, it’s disheartening, because we know the real story. It’s an emotional tug-of-war, because the discourse doesn’t talk about all that.”

How does this tug-of-war affect the agency? He says, “To take this nation forward, Latinos have a civic duty to engage in conversation, to educate people and erode ignorance toward minorities. We’re very active socially and in the community. We have a platform to take the discourse forward, yet we’re always cognizant of the lens of being marketers.”

But he doesn’t consider it a strictly Hispanic issue.

“We have an incredibly diverse team—ethnicity, gender, LGBTQ, and diversity in thought—and that wide range of demographics in the office gives us awesome communications and ultimately helps us create better work.

“From Day One we said, ‘We want to be the UN of marketing agencies.’ There’s so much power in that—to be able to represent America and the markets we serve.” 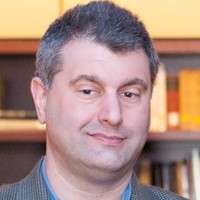 Jeff Segal is Senior Copywriter at StudioNorth, a full-service, mostly B2B agency with offices in Chicago and North Chicago. Jeff writes everything from tweets to white papers for StudioNorth clients in manufacturing, supply chain, healthcare, and IT, as well as non-profits and associations.