We’ve all heard the story of the unicorn, the upstart company that came out of nowhere and went on to be the star of its industry through dazzling technological innovations: Google, Netflix, Uber, to name a few. The temptation is to ask: “How did they do that, and how do I replicate it?” But is that even the right question? Daniel Newman gave a presentation for AMA Chicago that argues it is not the right question at all. He pits what he calls dragons against the unicorns – companies that take pragmatic steps to equip themselves to handle technological change.

Newman’s talk at AMA Chicago’s Evening with an Expert, Futureproof: 7 Key Pillars for Digital Transformation Success, left me with some great takeaways for what companies can do to be more like dragons in order to “futureproof” themselves and adapt to challenges, change and technology.

One of the ways companies can futureproof is by focusing on crafting excellent customer experiences and by using technology and data as a means to this end.

“Experiences are one of the most powerful ways to create a brand,” Newman explained. He cited Disney as an example of a company that focuses on magical experiences, so much so that employees who work at their parks are called “cast members.” Disney understands that keeping its amusement parks clean and pristine is a key aspect of the experience. Before there were even digital analytics, Disney asked crew members to count the average number of steps guests would take before discarding food they had bought, so they could place trashcans in the right spots to minimize litter.

Newman reminded us that “behind every like, click, and experience is a person,” a concept that we too often lose in the era of big data. I found this particularly resonant. I’m guilty of checking reports throughout the day to see how many leads my company has generated or how many sales were closed. It’s easy to forget that these numbers represent real people with wants and needs, but a futureproofed company doesn’t lose sight of that.

Change may seem like a simple concept, but resistance to change can be an incredibly difficult obstacle for a company to overcome. Who hasn’t experienced that moment of excitement over a new software solution or management structure, only to find that no one in his or her company was willing to take the time to learn to use it? But it’s more than that. Change can be necessary on a large scale in order for a company to survive.

Newman mentioned Target’s credit card breach fiasco a few years ago, which I, along with most of the audience had forgotten about. It certainly created a moment of panic for me when I first heard about it, but I haven’t thought about it once in probably the last forty times I’ve set foot in one of their stores. Target understood that they had to rebuild trust with their customers, first and foremost. One of the ways it accomplished this was by paying exceptional attention to the wants of each store’s local audience, lining shelves with items specific to the shopping preferences of customers within a tight radius of their stores. Newman mentioned how hard it is to find anything Hanukkah related in Naperville, Il, but when he travels to the north of Chicago to Skokie, Hanukkah items seem to dominate the store.

In the 21st century, when we talk about change, we’re often talking about the adaptation of new technology. “If the company doesn’t get behind the technology, the technology will fail,” Newman said. Change is possible in a culture of openness, one where from top down employees see new technology as a way of improving customer happiness. In a company with this attitude, employees understand that change has an important value proposition.

Build a Culture of Innovation

Like technology, innovation is a word that is particularly buzzy, but it’s a little more nebulous of a term. I have to admit, the way I think about it is quite different than the way he talked about it. While innovation is often associated with the invention of something completely new (my idea of what innovation is), Newman noted that it can apply to smaller, more mundane, but still vital changes.

This is where the dragon most visibly breaks away from the unicorn. A dragon may not invent something that comes from out of left field and changes everything, in fact it probably won’t. But the dragon sees that technology can be adopted and developed incrementally, with the desire to meet the wants and needs of the customer as the agent of this transformation.

More than anything, Newman’s presentation encouraged me to think about how all these terms and ideas, technology, innovation, experience, aren’t just trendy words, but critical concepts that work in harmony as a road map for where a company should go. It’s important to remind ourselves that, with these concepts, we really can futureproof our businesses and build dragons.

View a full gallery of photos from the event, courtesy of Organic Headshots. 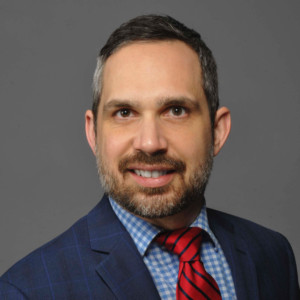 Luke Jones has been an AMA member since 2017. He currently serves on the communications committee for the Chicago chapter. The marketing manager at EON Clinics, a dental implants company, Jones uses aspirational lifestyle branding to engage audiences and drive growth. Previously at Emerson College where he earned his MFA, Jones created buzz through email marketing for professional theater performances headlined by John Malkovich, Cicely Tyson, and other big names.